The 4 Best Places to Live in Sunnyvale, California

The 4 Best Places to Live in Sunnyvale, California

Sunnyvale, better known as the home to many high-tech companies such as Google, Apple and Microsoft, is located in Santa Clara County in the San Francisco Bay Area. With a population of 147,559 people and 27 constituent neighborhoods, Sunnyvale is the 36th largest community in California. Now whether you’re reading this because you’re planning on moving into Sunnyvale in the near future or you’re just itching to learn more about this vivacious city, our goal is to make you more knowledgeable about the area by the end of this article. Keep in mind that Sunnyvale in itself is a great city that has a lot to offer, despite the neighborhood that you live in. Therefore we chose the “best” neighborhoods purely based on research and years of experience working as real estate agents in the Sunnyvale area. It’s also important to note that although everyone has different preferences in terms of amenities, cost of living and education, we’ve tried to narrow it down to the top 4 neighborhoods that ranked high across the board in all categories. So get ready to become a new found Sunnyvale experts because here are the 4 best places to live in Sunnyvale, California. 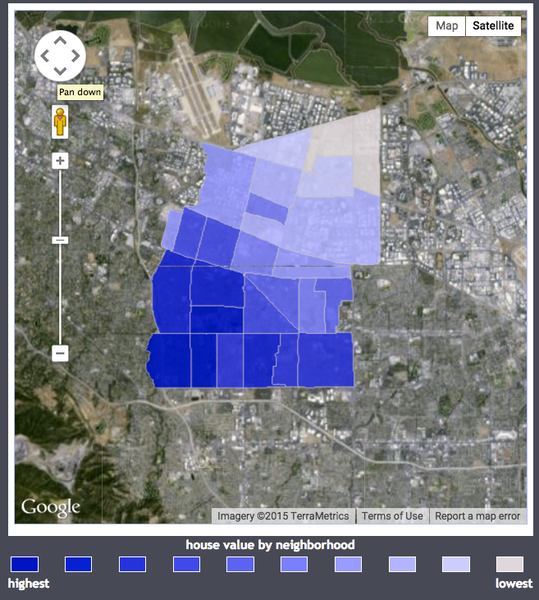 1. Employment: Sunnyvale is a white-collar city, which means that majority of the people who live here are professionals, managers and sales/office workers. About 89% of the workforce have white-collar jobs, which is well above the national average. To break it down for you a little more, 25% of people living in Sunnyvale work in computer science and math, 12.5% have management occupations and 6.24% hold office/administrative positions. What’s even more profound is that Sunnyvale has more people working in computer and math occupations than 95% of the places in the United States. As stated before, Sunnyvale is home to many high-tech companies such as Google, Apple, LinkedIn, Intuitive Surgical, Yahoo! and NVIDA. They don’t call this city the hub of innovation and technology for no reason.

2. Social: There is a relatively high proportion of people living in Sunnyvale who are young, single and upwardly-mobile professionals. It’s a great place for young, single professionals to find others like themselves who are looking for friendship and romance opportunities. Sunnyvale ranks in the top 1% statewide for the most well-paid single men and the top 3% for well-paid single women.

4. Cost of Living: Compared to the rest of the country, Sunnyvale’s cost of living is considerably higher than the U.S. average. This isn’t surprising considering that the unemployment rate is at 3.9% (U.S. average is 4.6%). The per capita income in Sunnyvale in 2019 is $67,471, which is wealthy relative to California and the nation. The average income of a Sunnyvale resident is $48,203 a year, whereas the US average is $28,555 a year. As of 2019, the Median household income of a Sunnyvale resident is $140,631 a year compared to the US average of $53,482 a year.

5. Transportation: Although majority of the community travels by personal automobiles, a substantial number of people use public transportation. This benefits everyone in the area by reducing both traffic and air pollution. People seem to either catch the bus or carpool to work every morning. The average commute time is 23 minutes, while the national average is 25 minutes.

6. Demographics: Sunnyvale is a very ethnically diverse city, with the majority being either white (39.8%) or Asian (46.7%). The city also has a sizeable Hispanic population, which accounts for 16.5% of the residents. Another interesting fact is that 48.6% of the city’s population was born in another country. Although English is the dominant language, some other helpful languages to know if you’re planning on moving into the area are Spanish, Chinese and Hindi.

7. Real Estate: The median sales price for homes in Sunnyvale in October 2021 was $1,1700,00. This represents an increase of 0.9% from the previous year. This basically means that the real estate market is on fire and that it’s a great time to sell your home. If you are interested in selling your Sunnyvale home, contact us today! 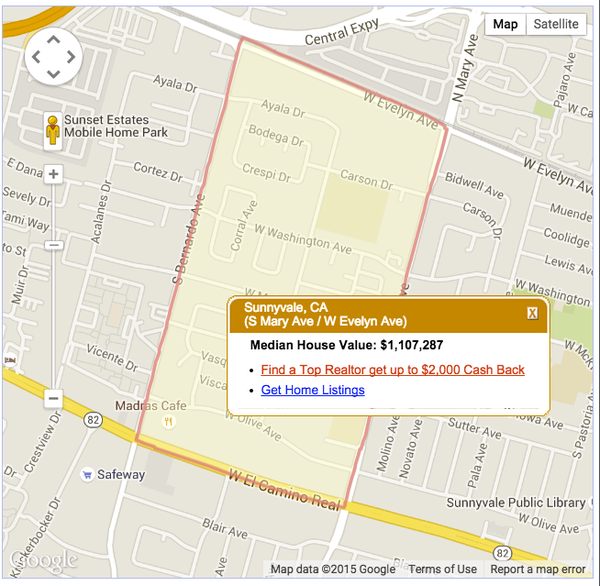 What’s interesting it that more Asians live in Sunnyvale West than nearly any neighborhood in America. What’s even more interesting is that 2.1% of residents are living with a same sex partner. This makes Sunnyvale West an area that truly stands out from the rest due to the fact that it has a greater concentration of same sex couples than 95.1% of U.S. neighborhoods. Talk about an area that’s ethnically, culturally and sexually diverse! Now the only potential downfall to some people is that it’s a college student friendly environment, which means the area is going to be noisier than most. While it’s not an environment for everyone, it’s a great place for college students considering the easy commute, the diverse group of ambitious scholars and the above average safety rating. 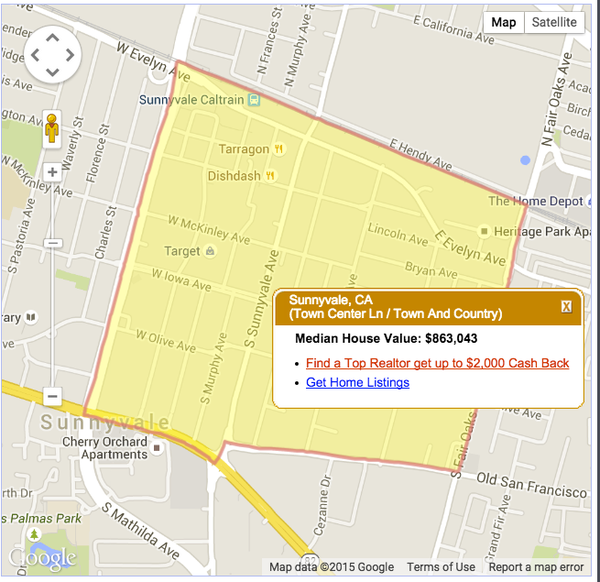 Town Center Ln / Town And Country is really the heart of Sunnyvale considering the fact that it’s home to the famous S Murphy Ave and Sunnyvale’s Cal-Train station. The median real estate price is $1,108,764, which is still more expensive than 86.9% of the neighborhoods in California and a fraction cheaper than S Mary Ave/W Evelyn Ave area. The average rental price is currently $3,980, so not much of a break if you’re looking to rent. Statistics show that this neighborhood has a higher income than 84.6% of the neighborhoods in America.  If your dream is to be able to ride your bike to work each day, look no further than this unique neighborhood. With 3.9% of residents in the Town Center Ln / Town And Country neighborhood commuting on a bicycle to and from work daily, this neighborhood has more bicycle commuters than 96.2% of all neighborhoods in the U.S.

An interesting fact about this area is that 0% of the children seventeen and under are living below the federal poverty line, which is a lower rate than 99.9% of America’s neighborhoods. Another unique aspect to point out is that 4.9% of the residents five years old and above primarily speak Hindi (the official language of India) at home. While this may seem like a small statistic, it’s higher than 99.4% of the neighborhoods in America. The only downfall to living in this area is that it might get a bit noisy at night depending on how far you living from the Cal-Train station. 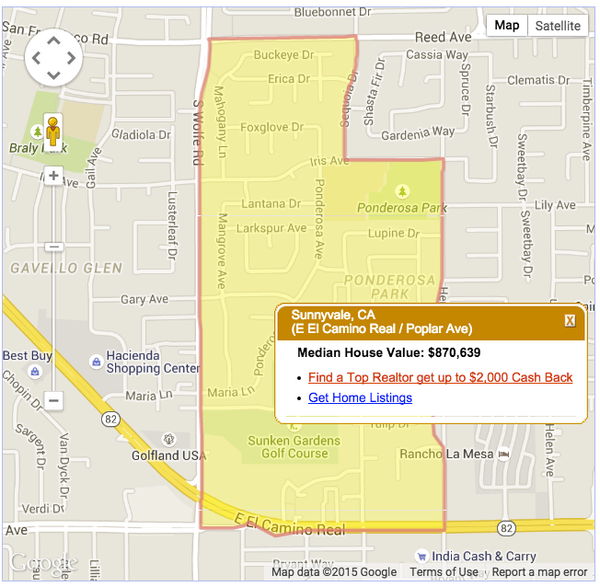 E El Camino Real/Poplar Ave is among the top 6.4% of retiree-friendly neighborhoods in California (Sunnyvale is no 14 in the state). Most of the residential real estate is occupied by a mixture of owners and renters. 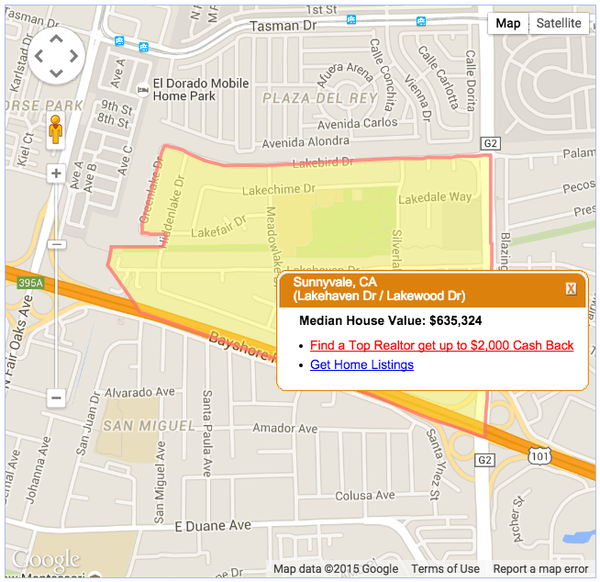 Lakehaven Dr / Lakewood Dr median real estate price is $635,324, which is more expensive than 72.5% of the neighborhoods in California. The average rental price is currently $2,266, which is higher than 88.1% of the neighborhoods in California. Although it may not be smart to rent in this area, it sure is an affordable place to buy real estate. We recommend this neighborhood for those who grew up in the Baby Boomer generation (1945-1964) because an incredible 88.6% of the homes were built during this era. So when you walk its streets or drive through, this neighborhood has a look and feel that harkens to that era in American life.

An important thing to note is that although this neighborhood is among the 15% highest income neighborhoods in America, there’s a good mixture of residents suffering from extremely low incomes. Statistics show that 11.1% of the children seventeen and under are living below the federal poverty line. Another interesting fact is that 27.4% of its residents five years old and above primarily speak Tagalog, which is the first language of the Philippine region, at home. While this may seem like a small percentage, it is higher than 99.9% of the neighborhoods in America. Residents of this neighborhood must also really love automobiles because statistics show that 52.2% of the households here have four, five, or more cars. That is more cars per household than in 99.3% of the neighborhoods in the nation.