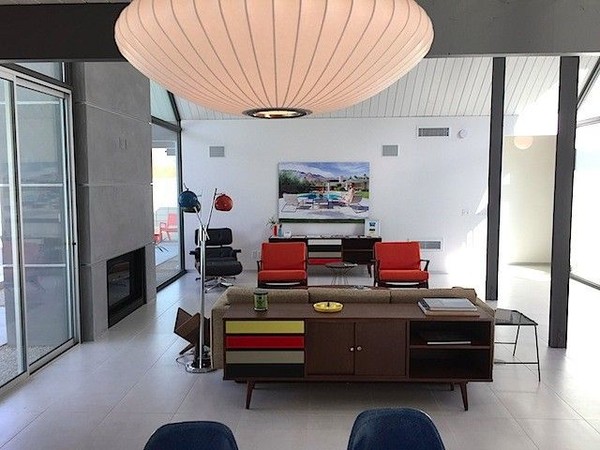 “Teach a parrot the terms ‘supply and demand’ and you’ve got an economist.” —Thomas Carlyle

While I’m not an economist by any stretch of the imagination, I can follow along with a parrot and I’m able to understand the basic laws of supply and demand.

On the supply side are the homes built by developer Joseph Eichler from the late ’50s to the early ’70s—around 11,000 them, located mainly in the San Francisco Bay Area and Orange County. On the demand side are artists and designers in Southern California and tech professionals in Northern California who consider these homes must-haves.

Kelly Laule specializes in Eichler homes in Orange County and told us the SoCal market is scorching. Not desert-scorching, but hot nonetheless.

“Inventory is pretty tight when it comes to Eichlers. While the market for a tract home has softened or leveled out in Orange County, demand for Eichlers continues to be strong. We’ve rocketed past the pricing of the boom times of the mid-2000s. In fact, we are about to close on a new record for an Eichler in Orange County—$925,000,” said Laule.

In the Bay Area, the story is similar, but the numbers are bigger.

Coldwell Banker agent Kevin Swartz specializes in Eichler homes in the South Bay. He told us that Sunnyvale, San Jose, and Cupertino are scalding hot thanks to wealth flowing in from tech workers.

He said most of the interest comes from folks who work at a certain Silicon Valley behemoth.

“I’d say 75% of the people who are buying in the South Bay are Apple employees,” Swartz said.

He also noted the supply issue without any prompting. “These homes are rare, and they sell at about 10% more than a comparable tract home,” he said. “People aren’t leaving their Eichler to buy a bigger home.”

With the tight market in both areas readily apparent, the supply problem is simple enough for even noneconomists to understand. The supply of these Mid-Century homes is capped at around 11,000, built mostly in the ’60s, when Eichler was at his peak.

Back then, Eichler hired well-known architects—including Claude Oakland, Robert Anshen, and A. Quincy Jones—to design the plans and the homes. He envisioned postwar homes built for middle-class Americans that were open, airy and, most of all, innovative. The developer wanted his homes to have clean lines and marry the outdoor space to the indoor. Floor-to-ceiling windows and open-air atriums are just a couple of signature details of his Mid-Century homes.

Demand for these relatively scarce homes has recently led to buyers paying a premium to live a swanky ’60s lifestyle.

But the pent-up pressure might be ready to ease thanks to the efforts of Troy Kudlac, an intrepid developer in Palm Springs, CA, whose dedication to the Mid-Century aesthetic has resulted in the construction of the first Eichler home in over 40 years. The 2,177-square-foot home has a modern feel, while keeping its vintage inspiration intact.

Walnut wood doors open onto four bedrooms, and that very same walnut is echoed in the living room and master bedroom paneling. You’ll find light leaking in through the abundant windows all around. Most of all, your eye is drawn to the center of the home—an open-air atrium that measures just over 400 square feet.

Kudlac began renovating, investing in, and selling other Mid-Century properties in and around Palm Springs a few years back, and he became smitten by the classic homes as he worked to rehab them.

As he delved deeper into all things Mid-Century, he fell hard for Eichler homes.

“We went to Orange, Thousand Oaks, Granada Hills, and flew up to the Bay Area to see them. Two thoughts came up: We love these things, but how can we build them? And why weren’t they ever built in Palm Springs?”

His laid-back demeanor hides a burning drive to get more of these homes built.

“I’m starting small—this is my first build—but I dream big. And I’m thinking in the scope of Eichler of himself—he didn’t want to build one, he wanted to build thousands,” Kudlac said.

Other architects and builders have taken cues from Eichler and built similar homes, often referred to as “Likelers.” And many houses that marry indoor living with outdoor space are built today, so I asked Kudlac why he didn’t simply take inspiration from Eichler and do his own thing.

He offered two big reasons: For one, he’s not an architect. He’s a savvy businessman. “If I don’t have to hire an architect, that saves me money,” he said.

For the second, he said, “I’m big on learning about what I’m working on. So I learned all about the Mid-Century architects, learned about the way they thought, and what they were doing. I was fascinated with builders like Eichler and how he operated. He set up a repeatable process. We’re going to follow what he did, get efficient, and save money. I think in his same mindset: OK, how can I extend what I’m doing?”

And after speaking with the down-to-earth developer, I got the sense he’s willing to lead the effort but doesn’t need the glory (or hassle) that would come from his own line of homes. He had no interest in simply lifting a few of Eichler’s concepts and slapping his own name on the home.

“People want more Eichlers,” he said. “For me to go out and offer the ‘Kudlac’—no one knows who I am. Businesswise, investmentwise, I have a built-in marketing pool of people who own these houses already.

“Palm Springs is where these same people want to come for vacation. Why wouldn’t I build these here and they could have two Eichlers? It’s a name that’s known, and I’m not an ego-driven person. I do it because I know how much people love these things.”

Kudlac said he’s been on the receiving end of a bit of snark from folks who wonder why he isn’t creative enough to come up with his own idea. His response?

“Tons of people knocked me and said, ‘Why can’t you come up with your own idea?’ This is an idea—no one has done this,” Kudlac said, motioning to the back wall of windows fronting the home’s luxurious round pool.

Working with Bay Area real estate agent and Eichler aficionado Monique Lombardelli, Kudlac licensed Eichler’s plans and made minimal updates to bring the four-bedroom house up to 21st-century code. The A-frame roof was a challenge because of city rules on structure height, but the resulting sky views from the atrium were worth the effort.

He also did away with Eichler’s famed radiant floor heating, knowing it wouldn’t be needed in the desert. But he did install a modern and unobtrusive air-conditioning system throughout the home’s roof. He also wired the home with Category 5 Ethernet cable and mounted an in-wall audio system.

He also flipped the script on the kitchen—in most Eichlers, the kitchen was a dark, walled-off room that doesn’t jibe with the current trend of open kitchens. Kudlac had seen many owners take steps to remove this wall in their homes—so he left the wall out entirely.

“In looking at updates,” he said, “we stayed true to what we think he would have done. We asked ourselves three things: What have existing homeowners done? What do they hate? And would Eichler do this? The kitchen is simply more friendly with the 21st-century floor plan.”

He also deviated a bit in the backyard: Knowing that the home might also serve as a vacation rental, he’s building a detached single-bedroom casita designed by Thomas Sylvia behind the pool. (He had a rental analysis prepared and conservatively thinks the home could bring in around $65,000 per year.) The casita’s been blessed by all parties involved and will be designed with a Mid-Century aesthetic.

Interested buyers will, however, have to wait till Kudlac puts up another. Last week someone paid the full asking price of $1.29 million—much to Kudlac’s surprise. He’d understood the interest before he sank a shovel in the ground, but he wasn’t prepared for the level of interest in his final creation.

While I was there, a constant stream of looky-loos drove slowly past the home, located on a quiet street tucked up against the mountains. The doorbell also rang a couple of times, revealing people who simply wanted to gawk.

For those who support Kudlac’s vision, there’s great news: He’s ready to break ground on his next four Desert Eichlers and is in the process of acquiring land to build another four. They’ll likely be built within the next five months—the first one took about four-and-a-half months from groundbreaking to near completion.

“We own four lots right now, and we’re ready to start,” he said. “In 30 to 60 days, we’re going to have two homes going. We’re also hoping to go from four to eight lots. It would be a little Eichler neighborhood, and we’re listing them at the same price.”

After that, the dream gets even bigger. Could Eichler make a triumphant return to the Bay Area? Kudlac was hesitant to offer a definitive “yes,” but he knows where the big money is.

“At some point, if Palm Springs gets rolling and people like these homes,” he said, “we could then fine-tune our processes and maybe provide a smaller, more affordable model. Maybe it would be cool to go somewhere else.”

I asked him how he felt now that construction was nearly complete, and he was relaxing in the spacious living room of the first Eichler home in over 40 years.

“I feel like these houses have their own life to them,” he said. Quoting Paul Adamson, author of “Eichler: Modernism Rebuilds the American Dream,” he added: “‘Living in an Eichler creates limitless boundaries’—because you’re living in this creative place where the outside is coming in all the time. You’re always in tune with nature and your environment. That whole vibe and feeling is how I’ve lived my life. I think big and go for it.”