In the land of the Eichler, a growing Bay Area real estate battle

In the land of the Eichler, a growing Bay Area real estate battle

BY: RICHARD SCHEININ I Siliconvalley.com

The rear of the Eichler home of Vilma and Don Buck photographed in Sunnyvale, Calif., Tuesday, Aug. 30, 2016. The couple has lived in their Eichler for 50 years.

SUNNYVALE — Fifty years ago, Vilma and Don Buck went looking to buy their first house. It didn’t take long to find the right one.

It was open, airy and filled with sunlight thanks to the floor-to-ceiling windows that lined the backside of the single-story tract home — a modest place, but, to them, a veritable palace.

Open the front door, and you could see clear through to the backyard. “Oh, the light,” said Vilma, a retired social worker, remembering her first look at the home, in 1966.

Never would she have guessed that her cozy neighborhood, filled with similarly cozy homes, would one day be on the front lines of a growing Bay Area battle over real estate — pitting one vision of California living against another.

In case you haven’t yet figured it out, the Bucks own an Eichler home. As do all their neighbors — including one young couple across the back fence who plan to knock theirs down and build a much larger two-story house on Sesame Drive. A “monster” house, as some neighbors call it. And here our story begins.

First in Palo Alto and now in Sunnyvale, owners have waged zoning battles in City Hall to prevent newcomers from knocking down Eichlers. Their goal: to protect and preserve their all-Eichler neighborhoods. In Sunnyvale alone, there are six petitions pending to bar the construction of McMansions amid the Eichlers.

“It’s the incongruity of a two-story house,” explained Don Buck, a retired De Anza College history professor who raised three children with Vilma in their 1,800-square-foot home. “It’s an oddity. It looks strange.” 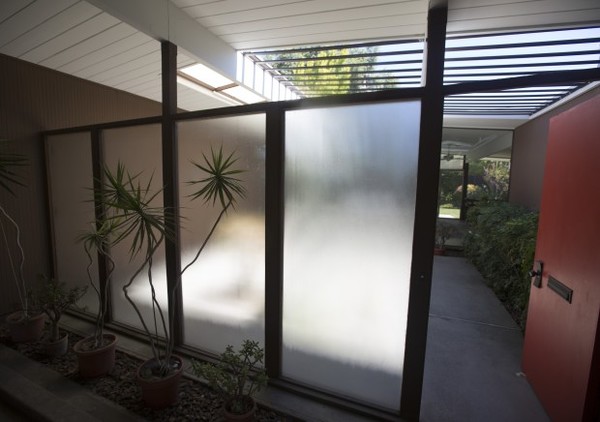 About 1,125 houses were built in Sunnyvale by developer Joseph L. Eichler, whose distinctive, midcentury tract homes create the sense of bringing the outdoors into their flowing, light-filled interiors. From 1949-74, Eichler — while based in Palo Alto and, later, San Francisco — built 10,500 houses across the region, even entire Eichler neighborhoods, from Walnut Creek to San Jose’s Willow Glen. What a concept: High-quality, affordable houses, attractive and architecturally distinctive to boot.

So why all the fuss right now? Bargains when they were built, Eichlers — like pretty much all Bay Area real estate — are worth a mint these days. Purchased for less than $30,000 in 1966, the Bucks’ home likely would fetch at least $1.7 million on today’s market.

But it’s more than that. With their minimalist modern lines and open floor designs — way ahead of their time — Eichlers have come to be regarded as “pieces of art,” said real estate agent Pelin Erdal, whose Saratoga-based firm has specialized in Eichlers since the 1980s. “Knock one down? People say, ‘Oh my gosh, why would you do that?’ Because that’s one less Eichler.”

Yet Eichlers aren’t for everyone. Maintenance can be complicated. Beams can rot. Plumbing, embedded in the concrete slab beneath the house, can leak. (Eichler was into radiant floor heating).

Which brings us back to Sesame Drive: After consulting with an engineer on the condition of their recently purchased Eichler, the Bucks’ neighbors — Alik Eliashberg and Lena Govberg — announced last year that they would raze it and construct a two-story house in its place. Word spread about this 3,600-square-foot home, approximately twice the size of most Eichlers in the Fairbrae Addition, a tree-lined neighborhood with its own community swim club — built by Eichler, of course.

Some neighbors feared for their privacy: Would second-story windows offer unimpeded views into the glass-lined living rooms and master bedrooms of the Eichlers below? Would the razing of one Eichler lead to more of the same — blow after blow to the Eichler neighborhood’s historic lifestyle and look?

“We told them, ‘We hope you understand we don’t want a lot of two-story houses around here,’ ” Vilma Buck said.

After Eliashberg and Govberg announced their project, a complicated permitting process began with the city. There were public hearings at which neighbors voiced their suggestions and complaints, sometimes angrily. One day, standing with her daughter outside their house, Govberg was confronted by one neighbor who told her to move.

“It got personal,” her husband said.

Many neighbors sent letters to the city, stating their objections. One, written by Eric Petersen, a general contractor who specializes in Eichlers and lives in the Fairbrae Addition, likened the planned house to a “huge container ship” that would overwhelm the “little rowboats” around it.

In any case, the project was approved by the city; demolition and construction are expected to begin later this year. But it will be the last two-story house built in the vicinity. Neighbors have successfully petitioned the city for a zoning change that from now on will prevent anything but single-story construction in the surrounding blocks.

“I’m not going to let this happen to any more of my neighbors,” said Michelle Sullivan, who shares a back fence with Eliashberg and Govberg. She accuses the couple of subverting the community’s historic character.

“I believe you should have your property rights. I also believe there’s something called property responsibility,” said Sullivan, who, with her husband, led the door-to-door campaign for the single-story zoning change. “People need to understand you have a responsibility when you move into an Eichler community. … This is a really historic area.”

Several more petitions are circulating on surrounding blocks, as the single-story movement grows in the Fairbrae Addition, which has about 275 Eichlers. Given that the nearby Fairwood neighborhood (with its 215 Eichlers) is equally embroiled — and that five petitions already have passed in Sunnyvale, two this year — it’s likely that a substantial portion of the city’s 1,125 Eichlers will soon be protected from two-story invasions.

“I get calls every few weeks from people asking, ‘What do I have to do?’ ” said Gerri Caruso, the city’s principal planner and one of the handlers of the petitions.

In the meantime, Eliashberg and Govberg have been preparing for their project. They recently sat down in their Eichler’s kitchen — a hummingbird buzzed through the adjoining atrium as they talked — and described their saga: how they originally planned to remodel, but were advised that renovations would be daunting and costly. New roof. New beams. New plumbing. It would be more efficient to knock down the Eichler and start fresh.

They reached out to their neighbors, explaining that they wanted to design a house that would fit the neighborhood and might even add an exciting splash of architectural newness. After all, building materials and construction techniques have changed since the time of Joseph Eichler. Here and there, the couple noted, Eichler himself built two-story homes.

“We live in this innovative, vibrant, melting-pot place, and the idea that everything must be the same seems very odd and very restrictive  ” Govberg said. “To me, this is not a museum. It’s our home, and I want to enjoy living here.”

They have made adjustments to their project’s design. For one thing, they won’t be able to see through the primary second-story window, the one that worries Michelle Sullivan — the glass will be heavily textured. They have offered to plant more trees and foliage to ease neighbors’ worries, and will raise the height of a backyard fence to 8 feet.

Some neighbors, their fears allayed, have given the project their blessing.

Even Don Buck has come around a bit. “They have been very accommodating, very pleasant, which is to their credit,” he said. “It’s just that it’s a two-story house, and it’s not very compatible with an Eichler neighborhood.”