One can inarguably say that the Bay Area has some of the most notable, yet strangely unique homes in all of the nation. If you don’t believe us, try take a stroll down the streets of San Francisco and take pictures of the homes that stand out to you. If you’ve done this correctly, you should have an album that rigorously reflects the political and historical values of the city. The homes we mention in this article have more than just an eye-catching exterior; They each have a one-of-a-kind story that makes them iconic to the Bay Area. Just read through the home’s descriptions and you’ll understand what we mean.

And boy does it pay to have a home that’s unconventional..All of these homes are well worth over a million dollars and are considered “hot pieces” of real estate. This basically means that they’d pretty much sell themselves if the owners ever decided to put them on the market. So get ready to embark on a fun and interesting read about the Bay Area’s 7 most unique and iconic homes. 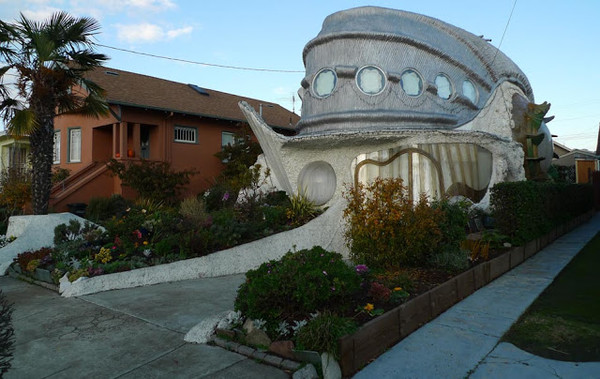 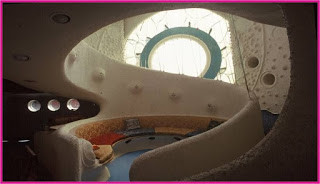 Description: The Ojo Del Sol (Eye of the Sun) Home or better known to Bay Area residents as “The Fish House” is definitely an eye catcher in West Berkeley. From the overall design of the home to the bright blue roof that just screams at you on Google Maps, you can say it’s a one-of-a-kind piece of real estate that would sell in a heartbeat if it ever hit the market. Although the home gets its official name from the massive eye-like window on its south side, the design was inspired by the hardy tardigrade, a water-dwelling micro-animal. If you look at the roof of the home, you’ll notice that it mimics the tardigrade’s segmented barrel-shaped body. This home was finished in 1995 for only $250,000 and still remains beautifully constructed thanks to the recycled styrofoam and cement that were used to build the walls. Let’s just say that if a forest fire were about the destroy the whole city, this is the first house we’d come to for shelter. 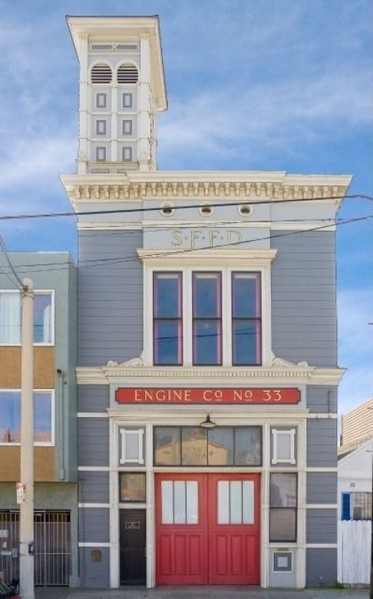 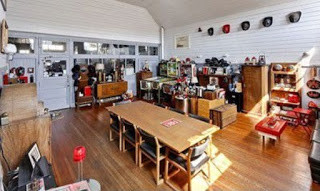 Description: Although there are many evident reasons as to why this house is unique, the value of the home derives from it’s history. San Francisco’s Firehouse 33 was in the firefighter business from 1896 to 1974 and stopped it’s operations in the 1970’s when bigger fire engines were built. Since the doors couldn’t accommodate to the wider girth, it became obsolete and a new FireHouse 33 was built around the corner (Hence why it was given the name ‘Old FireHouse’). The interiors of the home serve as a space to showcase a unique collection of fire service-related memorabilia, which is why the entrepreneurial couple who bought it turned it into a business called the ‘San Francisco Fire Engine Tours & Adventures‘. The home features the original redwood lockers the firemen used, a garage that can fit 6 cars (and a firetruck if you have one of those laying around somewhere) and logically a fire pole! Although it might be uncomfortable for some people to showcase a home they live in, it’s also pretty rare to find a home that comes with an operational business. All in all, we think this house is pretty cool and it’s definitely a one-of-a-kind property in San Francisco. 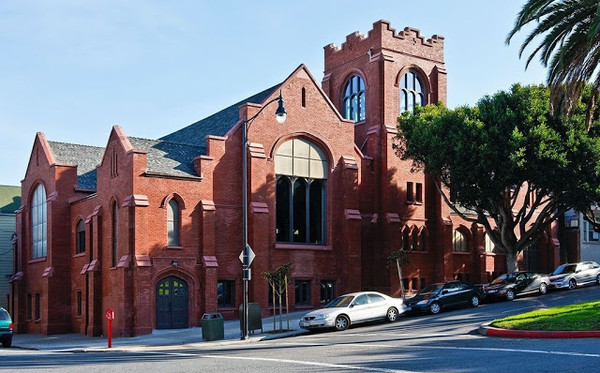 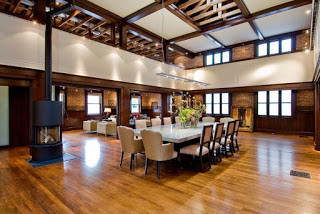 Description: You don’t have to be religious to fall in love with this home because anyone with eyes can see how breathtaking it is. This one-of-a-kind Gothic Revival style building features a living room with hand-painted ceilings and seven chandeliers, beautiful stained glass windows and incredible 360 views from the tower meditation room. The thing this home offers that’s so rare to find these days in San Francisco, is an enormous amount of space. It has 12 flexible rooms and a master bedroom that includes a media area, library and a Roman marble bath. It even has a tower with a private office and a roof deck where you can admire the beautiful city views all day long. Not surprisingly it’s located in one of San Francisco’s loveliest historic districts and is surrounded by some of the most popular restaurants and cafes in the city. You don’t see too many churches being reconstructed into homes these days, so this is definitely one of the most unique homes in the Bay Area. 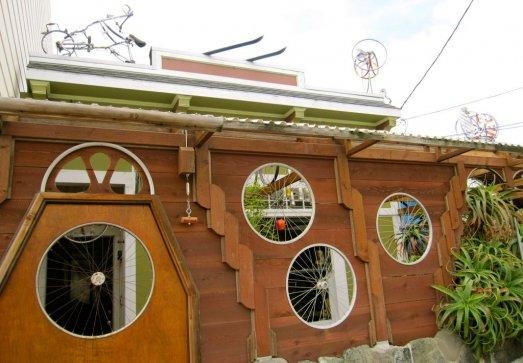 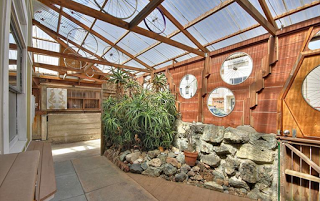 Description: If you ever want your home to catch people’s attention, try detailing the exterior with some bike parts. Located one block to Geary street shopping and transportation, this charming artists’ victorian home is well known to most Bay Area residents. It’s probably more popular than ever now since it’s been mentioned in Houston Chronicle’s article about ‘Some of the world’s weirdest homes’. If you ever thought you were the biggest fan of bikes, you probably didn’t meet the man/woman who designed this home. High ceilings, skylights, custom windows and personal designs make this a very special home in the Bay Area. You might even walk past it and mistake it for a bike shop. 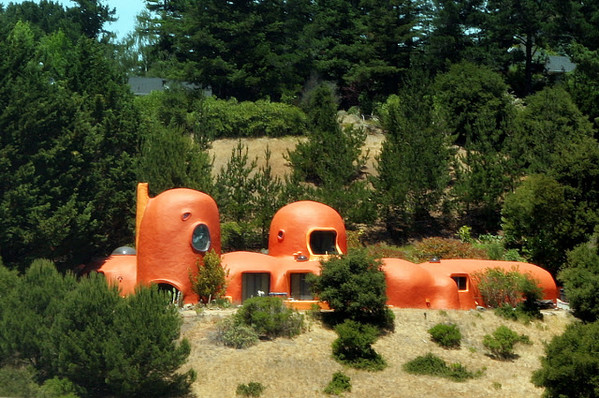 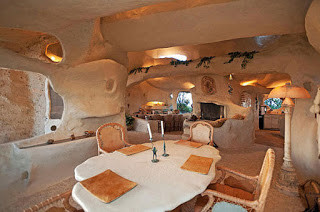 Description: You know your home is unique when it has it’s own Wikipedia page about it. Although we’ve seen this home from afar more than a dozen times while driving on Interstate 280 (it’s hard to miss since it’s a secluded home on the mountain tops of Hillsborough), we were amazed at how intricate and harmonious the interior was with the exterior when we got a chance to look at the house up close. The home was designed by architect William Nicholson in 1976 as an experiment in new building materials and looks very similar to the home in the popular cartoon series known as ‘The Flintstones’. It is rumored that George Lucas once owned the house and that O.J. Simpson made a bid following his infamous 1995 trial. It is also said that several famous Sillicon Valley investors have lived there as well. Regardless of ownership, the Flintstone House continues to serve as an unofficial California landmark and lighthearted reminder of the Bay Area’s forward, yet sometimes quirky, thinking. 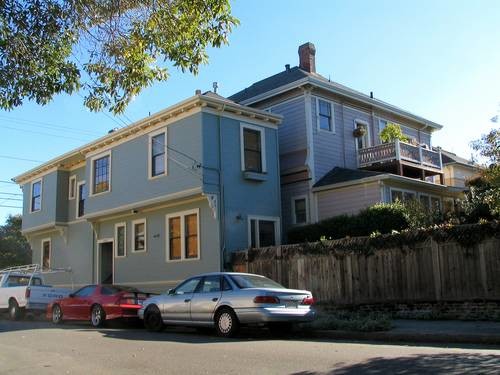 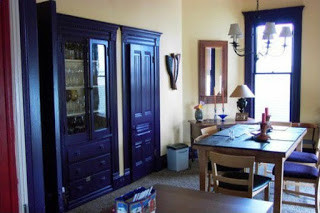 Description: According to Wikipedia, “A spite house is a building which is constructed to irritate neighbors or any party with land stakes. Spite houses often serve as obstructions, blocking out light or access to neighboring building, or as flagrant symbols of defiance.” There are only a few dozen spite houses that have been savaged across the United States and one of them still remains standing in Alameda, California. Charles Froling built the Spite House in 1890 when the city took a large portion of his land to build a street. To spite the city and an unsympathetic neighbor, Froling built a house 10 feet deep, 54 feet long and 20 feet high on the tiny strip of land that was left to him. As you can see in the photo, the Spite House is not much wider than an automobile and clearly blocks the view of the house that’s adjacent to it. Eventually, the Spite House was bought by the owner of the larger house and a connecting passageway was built between the homes. However, the home still remains a local legend in the Bay Area and stands as a historic symbol alongside the few other spite homes that remain intact around the country. 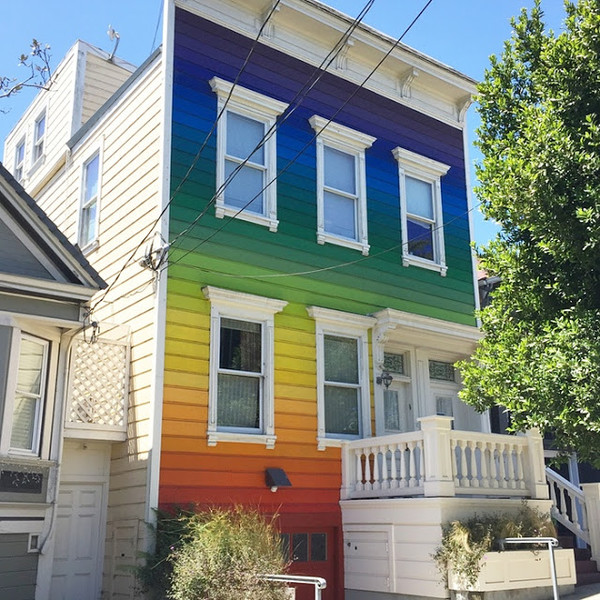 Description: If a city could embody a rainbow, it would be San Francisco. It is home both to the LGBT pride flag, which was first used in the city’s 1978 Gay Freedom Day Parade, and a wealth of architecture and street art in multicolour. The Rainbow House is a shouting testament to the city’s stance on gay marriage and reflects the trailblazing movements the activists in the city have taken to get to where we are today (Congratulations to the U.S. for finally legalizing gay marriage in all 50 states). Another element that makes this home so unique is that the 38 rows of clapboard siding uses a paint color system that is virtually impossible to mimic. The majority of these paint colors were custom mixed by design to suit an exact value, hue, and intensity. If you’re ever on Clipper Street in San Francisco, take a stroll past the Rainbow House and notice how vibrant and perfectly intact the colors are. The pictures just don’t do this house justice.